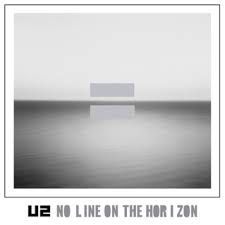 I’ve listened to the new U2 record “No Line on the Horizon” (in stores March 3rd) and am beginning to put some thoughts together on it. As I listen to it, I’m mindful that my relationships with U2 records are always long-term committed affairs. At this point, I think we’ll get along fine…but we’ll need to get to know each other.

The adjective that kept coming to mind the first time through was “brooding”. While repeated listens seem to be suggesting something other than “brooding”, I’d have to say that “Get On Your Boots” does not offer a very accurate peek in the window as the lead single for the record.

Bono’s voice sounds great throughout the record. The Edge’s guitars are in place. Adam & Larry drive the songs as I’d expect and hope from them. I suspect that Brian Eno probably ought to be credited as the “the fifth Beatle” on this project, which seems, at nearly every turn, to reflect his penchant for ambience and electronic noises kicking around in the background. Most of the time it comes alongside some undeniably “Edge-y” guitar sonics.

I also keep finding myself thinking at times that this record wants to carry the markings of “late masterpieces” like Sergeant Pepper’s or Pet Sounds or the White Album (for good and for ill).

This record is just about the opposite of a collection of hit singles (thankfully, U2 has never tried that approach). The potential singles (after the already released “Boots”) are probably “Magnificent”, “Breathe”, “No Line on the Horizon” and “I Know I’ll Go Crazy if I Don’t Go Crazy Tonight” (which I would predict will find a spot at or near the beginning of the upcoming tour’s nightly setlists). “Stand Up Comedy” might make it to radio, too.

The song most likely to be remembered in 10 or 20 years is “Moment of Surrender”.

The emphasis in “Stand Up Comedy” is on “Stand Up”. Along with “Boots”, it resurrects the cheekiness that was ever present in the Zoo TV and Popmart concerts.

“FEZ – Being Born” is the opposite of a radio-ready hit single. Starts out sounding like a remix, with looping samples of “Get on Your Boots”. Sort of Radiohead-esque at times. It might just be brilliant.

“White as Snow” is like no U2 song I can recall. Again, slow and brooding with a sort of spaghetti western guitar sound. For some reason, the melody brought to mind the Advent Hymn “O Come O Come Emmanuel”. On some level, the two songs might be connected by more than their music. Made me think of Johnny Cash working with Rick Rubin.

“Breathe” would probably be a more appropriate (and probably better) single than “Get on Your Boots”. Here’s a video of the band premiering the song on French TV:

“Cedars of Lebanon” ends the record in a way familiar to U2: instead of a climactic grand finale they offer an understated, reflective, and even melancholy final scene. The song ends with such stark suddenness that it almost stings as much as “Wake Up Dead Man” did on 1997’s POP.

Lyrics to the songs are available here (I’ll also mention that @U2.com is a great and reputable fansite).

I’m starting to feel a connection to the songs after 2-3 listens. This was the longest hiatus between records in U2’s entire career. I hope the wait is not as long for the next one.

One thought on “MUSIC REVIEW: U2 – No Line On The Horizon”