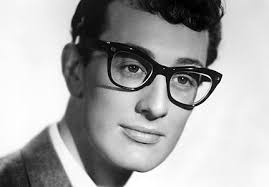 Last week, Monica & I were invited by friends down to the Media Theatre to watch a live performance of The Buddy Holly Story. It was a wonderful and fun retelling of the life of a man whose place in music history is equal to anyone across the ages, even though he played an electric guitar and died at age 22.

About halfway through the story there is a scene depicting the chance meeting of Buddy Holly & Maria Elena Santiago. The scene takes places in the lobby of a Manhattan music publisher’s office. Buddy Holly and his bandmates, The Crickets, enter the lobby where Maria Elena Santiago is working as a receptionist. Buddy is immediately taken with Maria and begins flirting with her. Even though Buddy Holly’s star was rising at the time, Maria Elena did not recognize him when he entered her lobby in person. In a comical exchange, Buddy Holly chats her up, asking her about music, and even what she thinks of Buddy Holly. Even as she goes on about how much she loves his music and how her company publishes his songs, he still doesn’t identify himself. He finally lets her off the hook by asking to see the boss without an appointment.

And when she asks him what his name is. He says, “Tell him Buddy Holly is here to see him.” At first she doesn’t believe him, but is then amazed to learn it’s true.

Suddenly, everything about that conversation changed. She was no longer talking about Buddy Holly, she was talking with Buddy Holly. The encounter worked out well: they were married two weeks later. Maria Elena Holly, now in her 70s, remembers it like it was yesterday.

I can’t help but think of that scene as I hear a similar story taking place seven miles outside of Jerusalem as two people walked along toward Emmaus. They were talking about the things that had happened : the crucifixion of Jesus, the burial, and how two women named Mary had astounded them that morning with the claim that the tomb was empty. As they were walking along, Jesus himself comes near, and even hops right into their conversation.

“What are you talking about as you walk along out here?”

And just like Maria Elena Santiago in that music publisher’s lobby, they began to talk openly about the one that mattered to them: Jesus. Words filled with reverence, excitement and great hope. They had absolutely no clue that as they talked about Jesus, they were also talking with Jesus.

Jesus continues the conversation without identifying himself. It’s clear that he knows a lot about the topic. The two travelers are so engaged by this unidentified stranger that they invite him to stay with them, and he does. And at the table, as he took the bread, blessed it, broke it & gave it to them, it was as though he leaned in & said, “Tell him Buddy Holly is here to see him.”

The identity of the risen Jesus is made known in the breaking & sharing of bread.

Everything about that entire conversation changed. Suddenly, they weren’t just talking about Jesus, they were talking with Jesus. “Weren’t our hearts burning within us while he was talking to us on the road?”

Is your heart burning today? Does it make your heart burn within you to know that we are not here simply to talk about Jesus, but that Jesus is present…that Jesus is here with you in this world? We make a mistake if we think that we come here so that God can give us some kind of antacid to soothe the heartburn that life gives us. When we encounter Immanuel, God with us, it makes our hearts burn. If that burning doesn’t seem to be ignited within you just yet, it is possible (I would even say probable…I would even say certain) that you are in the same position as the two travelers on the road to Emmaus. You are in the same position as Maria Elena in that Manhattan lobby. You’re waiting for God to be revealed, waiting for God to show up. Maybe you’re just living your life not even expecting God to show up, and, without any advanced notice,
God has simply shown up and is in the process of letting you realize it.

Jesus is also revealed in the breaking of the bread. Perhaps the single most unifying act of Christians from our very beginnings is the simple meal in which Christ is revealed in the breaking of the bread. This meal that we gather for today as we celebrate the open invitation of Jesus: the open invitation that has been accepted for the first time by seven of our children. I remember receiving Holy Communion for the first time, and what I remember the most all these years later is that it was the first time I ever tasted wine. As I left the table, I could feel this warmth radiating in my chest. It was a good warmth. It was as though I left the table saying “wasn’t my heart burning within me?”

Finally, on the road to Emmaus, Jesus is revealed in a stranger. As we go about our lives, Christ comes to us every single day in the faces of strangers that we meet along the way. And as we allow ourselves to be opened to others, even the stranger, everything can change as we experience Jesus present in our world.

As you travel today along the road that your life is journeying, be ready. Be hopeful that God will show up and cause your heart to burn. God is already there. You may not even realize it.
In the story and the scriptures, in the breaking of the bread, in the face of the stranger. God is already there.

I leave you with a piece of sacred poetry
Written by Dan Bollerud, a fellow Lutheran from Anchorage, Alaska
Reflecting on this story of Jesus appearing along the road to Emmaus: